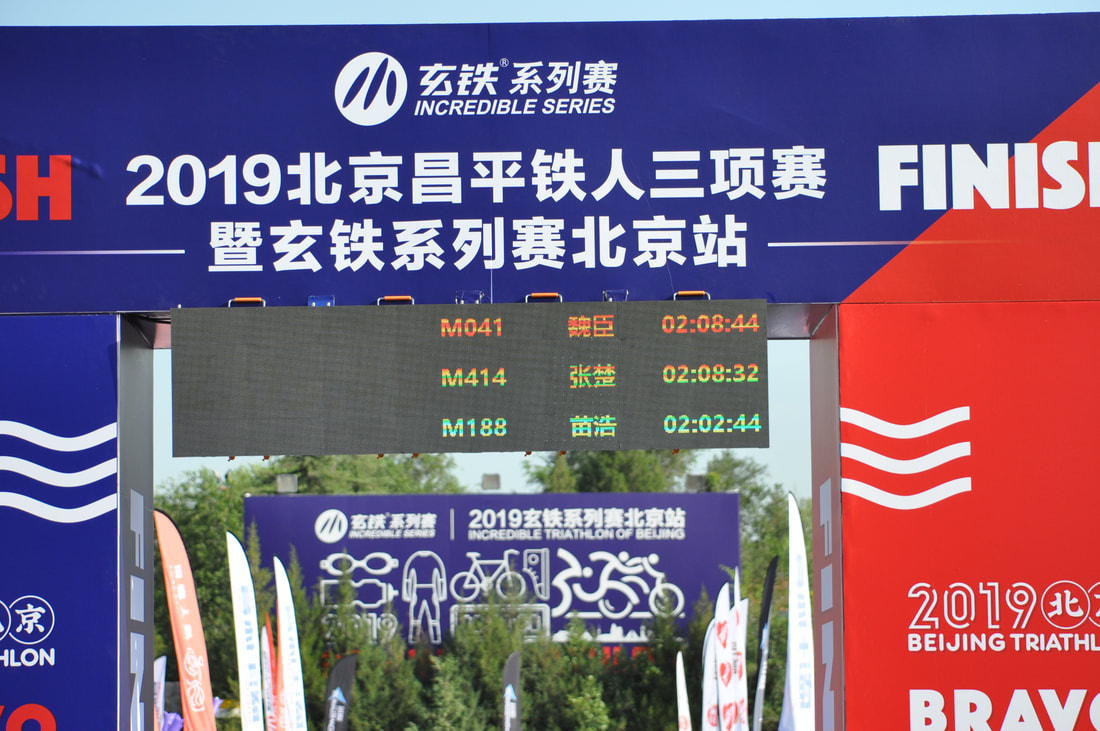 The sun was shining and the birds were singing this morning as 127 Super-Hero Kids competed in the August 24 INCREDIBLE KIDS BEIJING Triathlon.  Divided into two age groups, 6-8 and 9-11 they performed spectacularly.
This Incredible Kids competition is part of the annual Black Iron Competition Series held in four cities in China.
“We have 4 triathlon race all year, in Huangshan , Shanghai, Beijing & Dongguan.”
Who is “We?” TriUnion (Beijing) Sports Culture Co. Ltd. which coordinates www.iptri.com which is Xuan Tiebai Lian extraordinary cast (Incredible you, Incredible Life ), or 玄铁系列赛东莞站- Black Iron Competition Series
This was the first time I ever saw a Kids Triathlon. I was very impressed. How so? First, they all, and I mean everyone performed admirably. In most countries at least one kid would be whining or afraid. Talking with some parents before the competition I found out it was their child's first time in a lake. Yet, not one kid freaked out. They all smoothly flowed into the water. Sure, a few were a bit cautious on the ramp entering the water, wondering no doubt if it was slippery, but all went in the lake quite smoothly. I've seen plenty of adults freak out their first time swimming in the big wide lake. Second, everyone was cheerful. Kids can be funny people, but 127 self-disciplined happy, goal-directed children? Wow! Amazing to me.

Autumn is the most beautiful season in Beijing, and today again the skies were blue and the air ever-so-slightly cool at 6:00 am - all making for a beautiful day and perfect triathlon weather.

After the race time to relax... Ah! The good life.

For this site I tried to research this event in English and Chinese on the Internet. The first thing I found was posted on: https://www.runnar.com/#en
Then later found www.iptri.com
An event like this takes a huge amount of planning, promotion, organizing, and other logistic and material support. The following were crucial in its success:
Chief Organizer: Sports Bureau of Changping District of Beijing
Executive Organizers: Social Sports Directive Center of Changping District,
Beijing Shengfeng International Sports Development Co. Ltd.
TriUnion (Beijing) Sports Culture Co. Ltd.
Venue: Triathlon Venue at Shisanling Reservoir, Changping District.
No doubt the Sports Bureau of Changping District of Beijing and Social Sports Directive Center of Changping District are experts in organizing Triathlon events as they hosted the 2008 Olympic Triathlon and the 2011 World ITU Chanpionships here at this same venue. On the other hand, IPTRI is the organizer of four major triathlon events every year in addition to other races. Thus, it's not really surprising this was one very, very well organized event!
Incidentally the only English speaking official I was able to contact was from: www.iptri.com
Then I looked on my WeChat and found he worked for Sanfo last year. Thus, it appears different associations probably work together on several projects.